Today is the end of my sixth week at Recurse Center, and the halfway point of my 12 week batch. Its 9am, and I'm sitting here by myself on the 5th floor, feeling exhausted but in a good way, tired yet full of energy, unsure about how I feel about the week but knowing that I've accomplished a lot and still have an equivalent amount of time left to push myself to do more.

This week I finished week 8 of ASPMA, which was really interesting and was actally the kind of material I was hoping to learn. We learned about sound transformations, and how we could take a lot of the fundamental ideas and models from previous weeks (short-time Fourier transformations and the harmomic plus residual / stochastic model) in order to make some really compelling transforms. Here are some screenshots of some of them.

I'm looking forward to taking some of these techniques with me to Pioneer Works in and seeing how I can incorporate them when generating new soundscapes.

I also finished Part 1 of the fastai Deep Learning course for a second time! It was great getting a second pass at the material, as it really does require multiple viewings because of the density. Something I noted to look into is how to use (W)GANs to create new soundscapes from (environmental/industrial) noise. I think there is a lot of rich material here, especially in thinking about the poetics of taking enviromnetal "noise" and turning it into a more "desirable" state. I'm really excited to now know about some approaches that I can play with at Pioneer Works!

One of my goals for the week was to build out a prototype of a mobile app that shows your camera view, and also lets you record and playback audio. I'm happy that I was able to achieve that goal this week! Using Expo, I was able to get the camera view up and running in no time.

With the help of another Recurser, we were able to take Expo's audio recording example and refactor it to work in my current app.

I'm not sure specifically where to go next with this (maybe making spectrograms on the phone?), but I feel like this was a great first step and gives me confidence in moving forward with this project.

I hit a plateau with my bird sound classifier this week and kind of stalled out on it... I spent most of the week training, and tried running a 20+ hour training job overnight that ended up not completing. Lesson learned: If you can (and I can!) run something in a smaller, incremental number epoch cycles, do that! My sneaking suspicion, after talking with another Recurser, is that the Python process managing my training was doing a poor job managing memory, causing the RAM on Mercer (one of our GPU-enabled cluster computers) to slowly fill overtime and not get released, which in turn caused a swapdisk process on the machine to constantly go back in forth between trying to retrieve memory to and from the hard disk. I'm running my training again with a smaller amount of epochs (10 instead of 30), which I think is much safer and will always be done if I run it over night. I almost went home in defeat but took some time to do some non-coding things and felt better in the end :)

Me going down to visit Mercer to say "You're doing a great job...keep going!!" 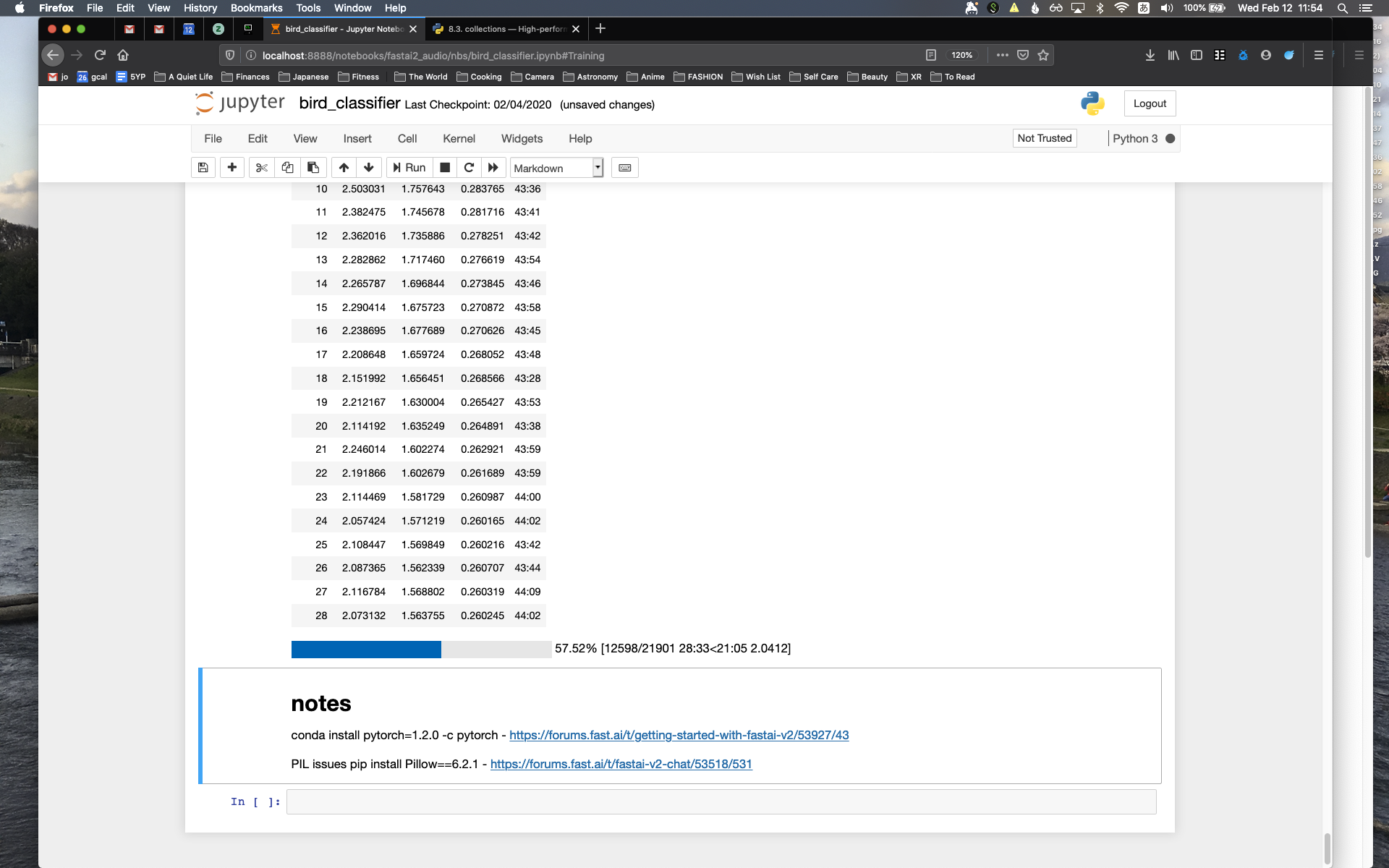 I think I hit a point with this project where I should try reaching out for advice on how to move forward, so I'm going to be posting my notebook to the fastai forums to see what others think. Next week I need to get my head out of the weeds, step back and tie it up at this point, in order to have a nice completed version of this project to share for my upcoming Localhost presentation.

I think my goals for next week will be tidying up my bird classifier project and demonstrating it doing inference on recordings from the dataset, and then from recordings of birds found in the Newtown Creek (ideally with my own recordings). All of this should be in the service of preparing for my Localhost talk. I think with that done, I'll be in a better place to try training models on outher audio datasets. I'd ideally like to also find time to pair with others on my mobile app, which is already at a good place. As always, I'll be continuing ASPMA, 6.006 lectures, and now Part 2 of the fastai Deep Learning lectures!